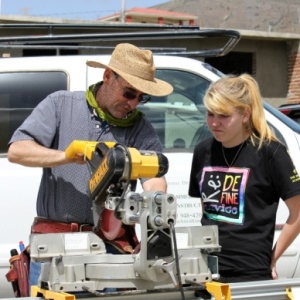 John demonstrates the use of the saw on the first day. Happily, no fingers were lost all week!

John and Sasha returned from Mexico, exhausted but joyful that the teams on their mission trip, with The King’s Academy, successfully built 15 homes and remodeled a school building.

For 20 years the students, parents, and staff of The King’s Academy in Sunnyvale have traveled to Tecaté, Mexico to build homes for over 250 Mexican families. A non‐profit organization, Baja Vision Ministries, helps identify the families in need of homes.

John and Sasha stand in the doorway of the house they helped build.

One team, consisting of five adults (including one Spanish-speaker and two experienced parent builders) and fourteen students, is assigned to each site. Building begins on Sunday afternoon and is completed by Wednesday night.

All students at The King’s Academy partake in mission trips all over the world
each year, the week before Easter break. It is hoped that participants will
broaden their world view and build relationships with the people they serve
and each other. And, by serving God, make a significant difference in
fulfilling the physical and spiritual needs of those they serve. 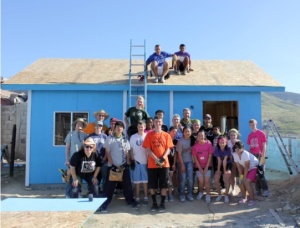 The house with the crew— John and Sasha are in the second row, second from the left.

Thank you John, for the wonderful team you have. Everyone is so professional, polite, and helpful in understanding the process. You guys are wonderful.
--Javier and Kathy Farinas, Los Altos
Bedrooms, Family Room, and Laundry Room

John and Lynn Hammerschmidt were a real pleasure to work with on our interior remodeling project, always polite and always keeping us informed. On top of that, the Hammerschmidt crew and subcontractors were professional and thorough.
--Craig and Edie Schamp
Whole House Remodel