One of the first signs of the Christmas season is the sight of a front door adorned with an evergreen and holly wreath. A welcoming sign of holiday cheer, wreaths have been used symbolically for centuries.

In ancient Rome, the wreath became so powerful that people used decorative wreaths as a sign of victory. Some believe that this is origin of hanging of wreaths on doors. The ancient Druids believed that holly, with its glossy, shiny prickly leaves of green adorned with red berries, remained green all year due to their magical properties. Many speculate the holly berries have given us our green and red colors of Christmas. Combining the symbolism of the wreath with the believed magical powers of holly, the Romans exchanged holly wreaths as gifts. Once Christianity took hold in Rome, holly wreaths became Christmas wreaths.

To add color to their Christmas wreaths, the American colonists incorporated colorful fruits. Pomegranates, in particular were used as they represented wealth. Celebrating the Christmas season for 12 consecutive days (the “12 Days of Christmas”) the celebration ends on January 5th, the 12th day.

While there are many designs and styles of Christmas wreaths, they mainly fall into two categories, the decorative wreath and the Advent wreath. The decorative Christmas wreath is used for holiday decorations and is usually made of evergreens, holly, or other materials which symbolize life emerging through a tough winter. The ring or wheel of the Advent wreath of evergreens decorated with candles was a symbol in northern Europe long before the arrival of Christianity. The circle symbolized the eternal cycle of the seasons while the evergreens and lighted candles signified the persistence of life in the midst of winter. Some sources suggest the wreath – now reinterpreted as a Christian symbol – was in common use in the Middle Ages, others that it was established in Germany as a Christian custom only in the 16th century.

Traditionally, the Advent wreath consists of three violet and one rose candle set in a circle of evergreens. In the center of the wreath sits a white candle. As a whole, these candles represent the coming of the light of Christ into the world. Beginning with the First Sunday of Advent, one candle is lit. An additional candle is lit during each subsequent week until, by the last Sunday before Christmas, all four candles are lit. The fifth candle, which symbolizes the birth of Christ, is lit on Christmas Eve or Christmas Day. 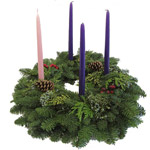 Whether you are looking to start your holiday decorating or trying to find a gift, a wreath can brighten a front door, a window or various places inside your home. See our resources section in the left hand column for more ideas.

There are no comments yet, but you can be the first